The Ancient Quarries on Mount Pendeli

The identification of the Parthenon (Elgin) Marbles Quarry

Photographs of the ancient quarries

Getting to the ancient quarries

Even since antiquity, Mt. Pendeli (ancient names Pentele, Pentelikon) (Elevation 1,109 metres) has been famous for its marble which was used for the construction of the Acropolis and other buildings of ancient Athens.

Pentelic marble, originating on Mt. Pentelikon north of Athens, was first used on a large scale for the construction the "Older Parthenon," a structure on the site of the current Parthenon that was destroyed before completion by the Persians in 480 BC.

Pentelic marble is flawless white with a uniform, faint yellow tint (caused by a trace of iron oxide), which makes it shine with a golden hue under sunlight. The ancient quarry is protected by law and used exclusively to obtain material for the Acropolis Restoration Project.

Scientists in the 1970s began to measure the stable isotopes of carbon and oxygen as a way to distinguish between marble varieties. A number of scholars have added to the database over the years, but Professor Scott Pike's study is the first systematic characterization of the Pentelikon quarry region.

In his doctoral dissertation for the University of Georgia, Pike points out that stable isotopes are atoms that have the same atomic number (the number of protons in the nucleus) but a different number of neutrons.

Calcite (Calcium Carbonate) is the primary mineral in marble, and since it is composed of carbon, oxygen and calcium, the conditions and manner in which calcite crystallizes affects the isotopic ratio.

With the cooperation of the Greek Ministry of Culture, Pike was allowed to undertake a thorough topographic and geologic field survey of the entire Pentelic quarry region.

Pike first mapped out all of the existing quarries in the ancient quarry region — studying a 500-meter wide and 1.2-kilometer long stretch up the south slope of Mount Pendeli.

Every one of the 164 ancient and modern quarries in the ancient quarry region on the south slope of Mount Pendeli was identified, geologically and topographically mapped and in most quarries multiple fresh marble samples were collected.

The assumption has always been that all the marble in a particular region was created as a result of the same geologic history and will have the same chemical signature, says Pike. His research shows that there is considerable variety between different pits in the same quarry.

Pike noticed that three neighbouring (relatively parallel) quarry pits  in the upper section of the quarry area have marbles with very high oxygen-18 ratios when compared to samples from all of the other Pentelic quarries, ratios that correlate with the published values of the Parthanon (Elgin) marbles. “The data not only confirms that the Parthanon marbles are Pentelic, we can now pinpoint the exact quarries from which the marble was extracted,” he says.

Marble comes from the shells and exoskeletons (e.g. crustaceans) of marine animals, deposited as limestone, buried by other sediment, then melted (usually by the heat of nearby volcanic intrusions) and re-solidified. This metamorphic process turns the amorphous (i.e. non-crystalline) limestone into a mass of interlocked calcite crystals.

The temperatures and pressures necessary to form marble usually destroy any fossils that may have been present in the limestone. The characteristic swirls and veins of many coloured marble varieties are usually due to various mineral impurities.

Among the most famous statues originating in the Pentelic marble region are the sculptures that originally decorated the Parthenon in Athens - the so-called Elgin Marbles, which were taken from Greece and brought to London in 1806 by Thomas Bruce, the seventh Earl of Elgin. Greece has long demanded the return of the marbles, which are now located in the British Museum.

The marbles formed the 160 metre frieze wrapped around the top of the exterior wall of the building’s inner chamber. Originally, there were 92 metopes - individual sculptures in high relief - on the Parthenon. Of 64 that survived, 15 are in the British Museum and 18 remain in Athens. In some cases, parts of the same sculpture are divided betweenAthens and London

The Parthenon on the Acropolis 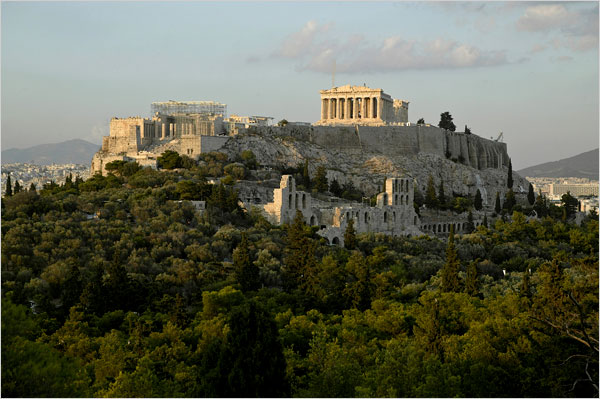 A metope from the frieze

One interesting possibility is that the marble blocks used to construct the Parthenon itself may have come from different and perhaps relatively distant quarries than those from which the Elgin marbles came. Future research and analysis will help unravel that and other mysteries. 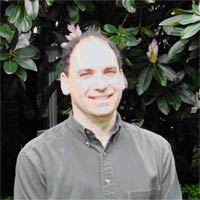 The study by University of Georgia doctoral student Scott Pike was reported at the 112th annual meeting of the Geological Society of America in Reno, Nevada (November 15, 2000 ).

Scott Pike earned his B.A in anthropology at Oberlin College in 1989 and his Ph.D. in Geology at the University of Georgia in 2000.